Cheese is simply delicious, and you wouldn’t be reading this if you didn’t think so yourself! Although, with so many varieties on offer, your tastes can vastly differ from other fellow cheese lovers, and this is something we wanted to explore in more detail.

So, we surveyed Brits on exactly what their most favoured cheeses are, reviewing everything from tasty brie to a classic Cheddar, to reveal the UK’s favourites. Just read on to discover which cheeses are the most popular and where!

Cheese is glorious in all forms, but we wanted to find out which one is sought after the most, is it fancy delights like camembert and brie, or do Brits just love a simple red Leicester?

Well, the results are in and we can reveal that cheddar is officially the UK’s favourite cheese, with 46% of respondents overall revealing that they go crazy for the stuff.

Cheddar actually came out on top in every city we surveyed, which proves how much people love it, gorging on a slice frequently to cure their cravings. Looking at gender, women appear to be even fonder of cheddar (54%) than men (37%), so we know who the real cheddar fiends are when the fridge has been mysteriously raided…

Bristolians go the craziest for cheddar

It was Bristolians who admitted their true desire for cheddar, with 64% of residents claiming this was their favourite, which was higher than any other city surveyed.

It’s clear, then, that the different cities in the UK share one thing in common when it comes to cheese - their passionate cheddar preferences!

Leeds were the lowest cheddar lovers

Of all cities surveyed, it was the West Yorkshire, Leeds eaters who ranked the lowest for liking cheddar, with only 31% of people claiming it was their favourite.

Although, this could relate back to population levels when compared with other areas, like Bristol, since cheddar was still deemed as the city’s top choice! Those living in this bustling metropolis actually stated Wensleydale was their second favourite cheese (26%), with red Leicester coming next (23%).

Cheddar may have been rated the holy grail of cheeses, but other tasty choices appeared in the top five for Brits. Surprisingly, red Leicester came in second place (20%). Many people may dismiss this classic cheese, but evidently, it’s a winner for cheese lovers across the nation. And even more so than mozzarella, which came next – with 18% of people stating this was their favourite cheese.

Next came the on-trend, Cypriot delight that is halloumi (15%) in fourth place, with posh picnic favourite, brie (15%) - the popular, soft cheese named after the French region, coming shortly after. By city, the number of brie fanatics were highest in Plymouth (22%), closely followed by Southampton (21%), London (20%), Norwich (19%), and Sheffield (19%).

After reviewing our data, we found the greatest population of halloumi enthusiasts were Liverpudlians (26%), with 30% of foodies here also rating red Leicester highly when compared with other metropolises!

17% of men said they don’t like cheese at all

As well as favourite cheeses, we looked into which respondents did and didn’t like cheese. To our surprise, 17% of men claimed they didn’t like cheese at all, compared with only 8% of women. Clearly, then, women are more drawn to the taste of this dreamy dairy product.

Interestingly, 16-24-year-olds were the highest age group to state they didn’t like cheese, with 21% of respondents admitting so. Overall, only 5% of people said they don’t have a favourite type of cheese at all, which proves that we’re a nation of cheese lovers, through and through!

How to perfectly pair your cheese

To make sure you’re getting the most out of your favourite cheeses, we thought we’d provide the ultimate flavour pairings for you to try, to complement the nation’s top five:

Cheddar pairs wonderfully with fruits, such as apples, pears, grapes, peaches, plums and cherries. However, for a more savoury pairing, this rich, hard cheese also pairs extremely well with onion chutneys. And luckily for you, we stock a range of delicious onion chutneys, which are all handmade by us. Simply try our red onion chutney or caramelised onion chutney as the perfect cheddar companion!

Some of the best flavours to pair with halloumi are lemon, mint, watermelon, honey and pomegranate. It really is an all-rounder.

Brie is a cheese that ideally needs to be paired with something a little more acidic, to truly bring out its flavour. Savour this delightful cheese with sliced apples, grapes, pears, fig jam or honey for a taste sensation.

From mozzarella to a tongue-tingling blue cheese, see how much of a cheese-pro you are with our Cheese-o-Meter: 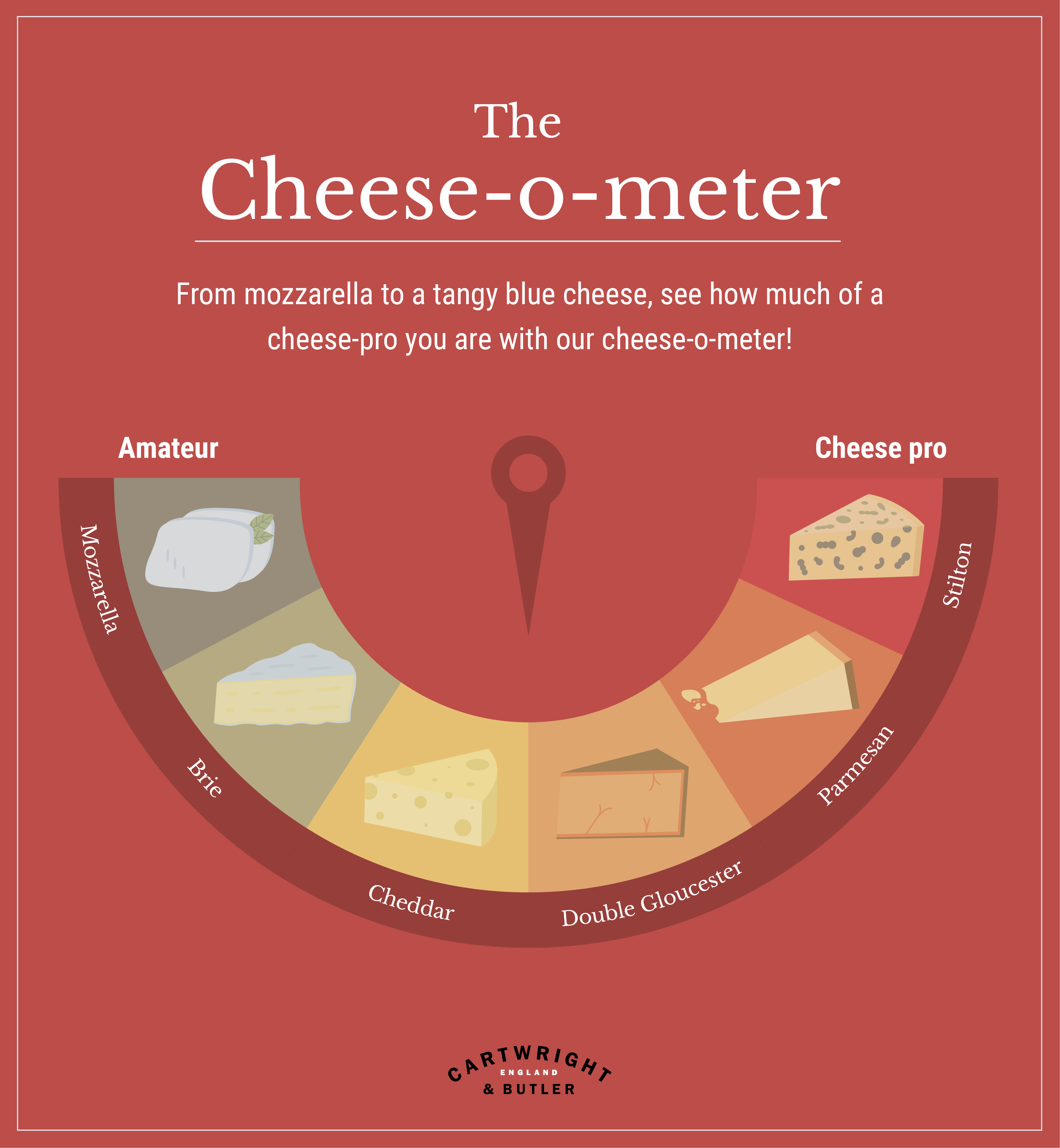 All this talk about the highly-rated cheeses in the UK means you’ll probably be craving some of the stuff yourself, and our decadent cheese hampers are sure to suit your every craving.

For more insights into food-related findings, visit our blog. Here, you can discover pieces on the most generous cities in the UK alongside interesting articles on the perfect wine and cheese pairings, as well as so much more.

Survey of 1000 people based in the UK conducted by Censuswide. Respondents were asked to choose their five favourite cheeses from a list of 15.

View All
View All Valentine's Day

View All
View All Christmas

View All
View All Hampers & Gifts

View All
View All Biscuits

View All
View All Pantry Products

View All
View All Luxury Beverages

We care about your data. That's why we promise to only use cookies to improve your experience. Find out more here.  Now, let's find you some cookies.

Sorry, there's no space for that!